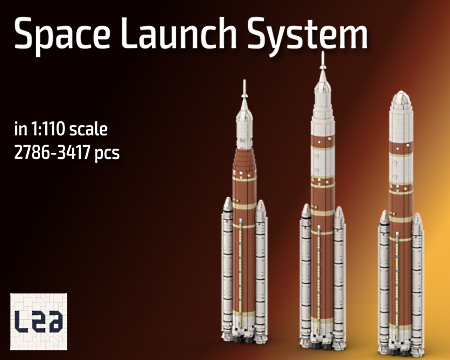 After the successful launch of NASA’s Space Launch System (SLS) Artemis 1 rocket to the moon, folks may wish to build their own. A quick jaunt to Rebrickable shows designs by several LEGO makers.

Are you tired of white and gray launchers? Want something newer than Space Shuttle? Or do you just need a detailed Space Launch System? Maybe in different configurations? You are at the right place!

The Space Launch System (SLS) is an American super heavy-lift launch vehicle under development by NASA since 2011. Offering more payload mass, volume capability, and energy, SLS is designed to be flexible and evolvable and will open new possibilities for payloads, including robotic scientific missions to places like the Moon, Mars, Saturn, and Jupiter. The SLS is intended to be use in Artemis program to carrying astronauts to the Moon. The first flight of Artemis 1 on the first SLS is expected to be in February, 2022.

This model is built in 1:110 scale, which is the same as the official Lego ideas Saturn V set. I originally designed this model in 2019 based on computer graphics. Since then, the first actual hardware has been completed and NASA has finalized the plans for Block 1B. So I decided it was time to upgrade to the original plans – which eventually ended in a major redesign.

See the details on Rebrickable here.