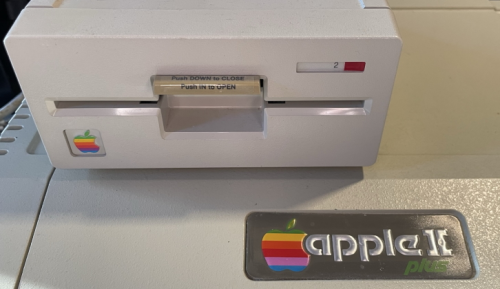 When I got my Apple ][plus back in 2017, it came with two all-important cards: the Microsoft 64kiB expansion card, and an Apple 5.25” Floppy Interface card. And now I replace one of the original cards. The Apple’s floppy disk controller is a feat of engineering history: why would I replace it?

The Apple ][ is the master work of engineer Steve Wozniak. But just as important as the Apple ][ was its disk drive system: the Disk ][. The genius of the Disk ][ comes from its decision to break with industry standards. At the time, most floppy disk drives were their own computer, and communicated with the PC over a standard bus like the parallel IEEE-488. But Wozniak reasoned that the Apple ][ had a perfectly good CPU right there, and if it controlled the floppy drive directly, it wouldn’t need to transfer the data over at all.

The resulting Disk ][ was renowned for its affordability, engineering simplicity, and its performance.

The Disk ][ was a masterwork. But there was a problem: the Apple had a slow 1.0MHz CPU, with a variable clock due to the video circuit (also a masterwork of engineering limitations made by Steve Wozniak). This was fine to control the 5.25” floppy, but what about faster drives with higher storage capacity? Say, the 3.5” disk Apple themselves were popularizing with the Macintosh?

Apple’s solution to that was the UniDisk 3.5”.

The Yellowstone is an improved and expanded clone of the Laser Universal Disk Controller, so it supports not only SmartPort, but pretty much every drive. It’s powered by a Lattice FPGA. In fact, according to BMOW’s posts, most of the chips only serve to translate between the Apple II’s 5V logic and the FPGA’s 3.3V.