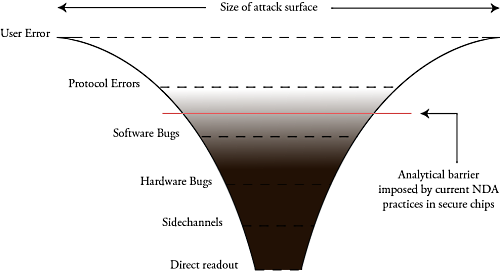 …an early-stage SE chip startup, Cramium (still in stealth mode), approached me to advise on open source strategy. This blog post explains my reasoning for agreeing to advise Cramium, and what I hope to accomplish in the future.

As an open source hardware activist, I have been very pleased at the progress made by the eFabless/Google partnership at creating an open-to-the-transistors physical design kit (PDK) for chips. This would be about as open as you can get from the design standpoint. However, the partnership currently supports only lower-complexity designs in the 90nm to 180nm technology nodes. Meanwhile, Cramium is planning to tape out their security chip in the 22nm node. A 22nm chip would be much more capable and cost-effective than one fabricated in 90nm (for reference, the RP2040 is fabricated in 40nm, while the Raspberry Pi 4’s CPU is fabricated in 28nm), but it would not be open-to-the-transistors.

Cramium indicated that they want to push the boundaries on what one can do with open source, within the four corners of the foundry NDAs. Ideally, a security chip would be fabricated in an open-PDK process, but I still feel it’s important to engage and help nudge them in the right direction because there is a genuine possibility that an open SDK (but still closed PDK) SE in a 22nm process could gain a lot of traction.

When it came to processors:

…when Cramium approached me, their original thought was to ship the chip with an ARM Cortex M7 CPU. Their reasoning is that developers prize a high-performance CPU, and the M7 is one of the best offerings in its class from that perspective.

However, if Cramium’s chip were to gain traction and ship to millions of customers, it could effectively entrench the ARM instruction set… so, I worry that every new market embracing ARM as a de-facto standard is also ground lost to fully open architectures such as RISC-V.

So, after some conversations, I accepted an advisory position at Cramium as the Ecosystem Engineer under the condition that they also include a RISC-V core on the chip. This is in addition to the Cortex M7. The good news is that a RISC-V core is royalty-free, and the silicon area necessary to add it at 22nm is basically a rounding error in cost, so it was a relatively easy sell. If I’m successful at integrating the RISC-V core, it will give software developers a choice between ARM and RISC-V.

Comments Off on Towards a More Open Secure Element Chip #OpenSource