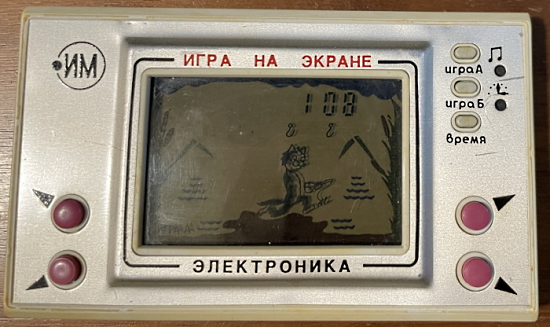 In 1971, the Soviet Union abandoned its in-house computer system development, which included some very interesting experimental concepts like balanced ternary, in order to adopt Western designs like IBM’s System/360. However, it’d be a lie to state that the Soviet Union didn’t have the production capability; even though the machines were produced to imitate western standards, they were wholly of domestic manufacture.

Elektronika was not a company in the usual sense we’d see on this blog; the Soviet Union was not a capitalist society, after all. It was the main brand name of Minelektronprom (Ministry of the Electronics Industry), a division of the Soviet government. And it was used by a huge scale of consumer electronics, from high-end computers, to various models of digital watches.

Above is the Elektronika IM-32 (ИМ-32 in Cyrillic), “Kot Rybalov”, or Cat Fisherman. The concept is a cat who fishes by having fish jump onto his fishing rod; not quite sure if that’s how fishing works, but maybe things were different in the worker’s paradise. Much like the Nintendo Game & Watch series, many of these Elektronika games were based off of popular Soviet cartoons; this is no exception.

Comments Off on Soviet Game and Watch: the Elektronika IM-32 #Gaming @nicole_express