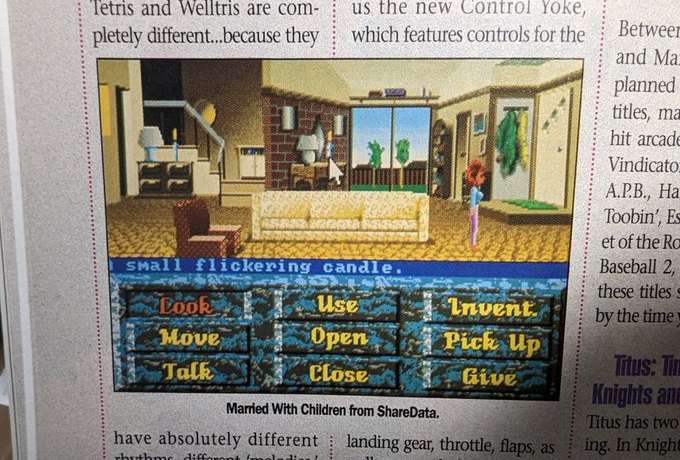 Frank Cifaldi has an excellent thread on Twitter discussing the provenance of a “Married…With Children” point and click adventure game.

Omg, I just found a screenshot of the lost “Married…With Children” point and click adventure game, I had no idea this was real and not just a licensing announcement

This was announced for the NES too but no way it was ever in development (…right?)

So I found the producer’s name in a magazine, realized they misspelled it, found the real name on MobyGames, found his Wikipedia entry, and found out he unfortunately died 10 years ago. And the reference for his death was an obituary… …written by me. The world is small.

This game was being developed internally by ShareData’s staff in Phoenix. It didn’t get very far before they pivoted entirely to the Nintendo market. The team working on this went on to stuff like Wally Bear and the No! Gang

When the writing was on the wall a bunch of the devs left to contract for EA. Their first project was an unrealized and mostly unknown Bard’s Tale IV.

I mistook the graphics in Married With Children as being from a veteran studio, but in reality, it was just an incredible artist: Scott Mavor, son of illustrator Elinor Mavor, who edited Amazing Stories magazine.

You can read the entire thread here. It’s sad it was cancelled.