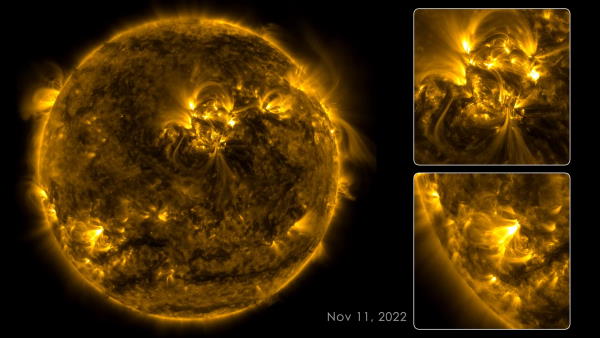 This video chronicles solar activity from Aug. 12 to Dec. 22, 2022, as captured by NASA’s Solar Dynamics Observatory (SDO). From its orbit in space around Earth, SDO has steadily imaged the Sun in 4K x 4K resolution for nearly 13 years. This information has enabled countless new discoveries about the workings of our closest star and how it influences the solar system.

With a triad of instruments, SDO captures an image of the Sun every 0.75 seconds. The Atmospheric Imaging Assembly (AIA) instrument alone captures images every 12 seconds at 10 different wavelengths of light. This 133-day time lapse showcases photos taken at a wavelength of 17.1 nanometers, which is an extreme-ultraviolet wavelength that shows the Sun’s outermost atmospheric layer: the corona. Compiling images taken 108 seconds apart, the movie condenses 133 days, or about four months, of solar observations into 59 minutes. The video shows bright active regions passing across the face of the Sun as it rotates. The Sun rotates approximately once every 27 days. The loops extending above the bright regions are magnetic fields that have trapped hot, glowing plasma. These bright regions are also the source of solar flares, which appear as bright flashes as magnetic fields snap together in a process called magnetic reconnection.

While SDO has kept an unblinking eye pointed toward the Sun, there have been a few moments it missed. Some of the dark frames in the video are caused by Earth or the Moon eclipsing SDO as they pass between the spacecraft and the Sun. Other blackouts are caused by instrumentation being down or data errors. SDO transmits 1.4 terabytes of data to the ground every day. The images where the Sun is off-center were observed when SDO was calibrating its instruments.

See the video below:

Comments Off on 133 Days on the Sun #Science #Space @NASA